Utilising a remarkable array of activities & skills such as storytelling through a didgeridoo, vocal harmonics, commusication, drama, poetry, comedy, edutainment, holoprinting, etc. - Bruce transforms boring conventional messages & topics into vibrant & captivating learning adventures. From these art-making experiences delegates rediscover the 'learner within' thereby ensuring that something new is understood &/or something is newly understood.

Bruce Copley, former University Professor of Human Movement Science, is an internationally acclaimed holistic educator who has inspired tens of thousands of people to rediscover their lost love of learning. Bruce has spent the past 40 years totally engrossed in - EDUCATION! The first 19 years were spent in formal academic education at 5 universities, 3 in South Africa (Pretoria, Rhodes and Witwatersrand) & 2 abroad - Simon Fraser University in Canada & San Diego State in the United States of America.

During this time Bruce was awarded multiple degrees, was the recipient of the prestigious British Association Medal for exceptional scientific research & was a Professor and Head of Sports Science at Wits University in Johannesburg.

For the past two decades Bruce has immersed himself in the art and science of informal and alternative education, and pioneered and developed his revolutionary holistic methods of education and training known as Cogmotics (cogitare - to think, and motare - to move).

Described as a real life version of the teacher in the award winning film 'Dead Poets Society' Bruce creates unforgettable learning experiences for people from pre-schoolers to senior citizens.

He brings a fresh and profound approach to holism, grounded in his own awakened awareness and fuelled by a passion to rekindle in others the freedom and fullness that is their innate birthright. He draws no sharp distinction between his mind and body, his labour and leisure, and his teaching and learning. He is content to pursue his visions of excellence through whatever he is doing leaving others to question whether he is playing or working... to himself he always appears to be doing both. His two ongoing challenges in life are to walk his talk and to hold his visions lightly.

Conferences:
Consistently rated as the leading speaker at major international conferences since 1999

First live SA/USA conference broadcast in 1991:
With the late Dr Leo Buscaglia entitled 'Only you can make the difference'

RAINBOW VUVUZELA:
Dr Bruce Copley multi-intrumentalist and pioneer of corporate drumming in South Africa has made an exciting discovery that transforms the vuvuzela into a sweet sounding multi-noted musical instrument. This revolutionary discovery a world first, offers a simple, creative and effective solution to the controversial white noise produced by the vuvuzela. With a few simple techniques, a little practice and without instrument modification any Vuvuzela enthusiast can learn to play the RAINBOW VUVUZELA producing multiple trumpet notes, a delightful range of sweet sounding African Penny Whistle notes and tunes, use it as a megaphone to amplify singing and whistling sounds, create simple rhythms and riffs and even play conventional tunes such as our national anthem, amazing grace, sweet chariot, etc.

The African continent and in particular South Africa has a proud reputation for producing beautiful music, songs, dances and rhythms. Played conventially in our stadiums the vuvuzela is not doing this hard earned musical reputation any justice...learning to play the Rainbow Vuvuzela brings back the music and ensures smiles on the faces of all those who play or listen to it.

WHAT NEEDS TO CHANGE IS NOT THE VUVUZELA(design, shape, composition, colour or size) BUT THE PLAYER !!........ this is exactly what the Rainbow Vuvuzela demonstrates so sweetly and joyously.

Mr Neil van Schalkwyk the father of the Vuvuzela that he introduced to South Africa in 1998:
'It is with a lot of glee and satisfaction that I write in response to the fantastic work you have done in developing the Rainbow Vuvuzela..... you have come up with a solution to create sweet music with the vuvuzela....traditional football supporters have only known one way of blowing the vuvuzela......we look forward to working with you in taking the vuvuzela to a new level through the beautiful music it will now create.... considering the potential impact your revolutionary method will have on the way we celebrate football in South Africa, I see the rest of the world embracing our culture for years to come'

Mr Kevin Chaplin, Director of the Amy Biehl Foundation:
'We are very excited about the Rainbow Vuvuzela........we are keen for a training session for all our 52 facilitators and co-ordinators......we are also very excited for the 1446 children in our programmes being given this opportunity.....they come from the townships of Guguletu, Nyanga, Crossroads, Langa and Mammenberg......we are eagerly awaiting to start this exciting project'

Dr Henning Gericke, Sport Psychologist:
This celebrated sport psychologist who worked with Jake White and the 2007 World Rugby Cup champions is very excited about the Rainbow Vuvuzela and has given it his full support. He would like it introduced to our Bafana Bafana players so that they can produce beautiful music with it and inspire and motivate their followers to do the same.

'Of the 51 external contributors who met with the Meridian group this year, comprising leading figures across the public, private and civil society sectors, you were voted the second-best speaker. Given the calibre of the individuals who contributed, from Director Generals of national government departments, to other CEOs, Heads of NGOs and individuals who carry great reputations in their personal capacities, this is a significant achievement and a great honour. Thank you again for your contribution to the group. We are most grateful to you!...This has been a great year of connection between AHAA Learning and Common Purpose.'
- Elsbeth Dixon, CEO of Common Purpose

'Rather than trying to teach you something Bruce Copley masterfully invites you into discovering and finding out for yourself. From the first experience we were prodded through communication, coaxed through music, beckoned through theatre, teased by drums and nudged by silence.'
- Sandy Dacombe, SABC presenter

'Your interventions have played a significant role in the transformation processes in the various businesses I've managed over a number years. I applied many of the holistic lifestyle and leadership principles learnt from you and they resulted in dramatic changes in both my life and those of my staff. Significant positive impacts on quality, standards, service, revenue growth and profitability were the result.'
- Mr Grant Ruddiman, Leading International Hotelier

'Dr Copley’s passionate and interactive approach is a refreshing departure from tradition and conventionality. He manages to do exactly what he says which is to re-ignite a person's passion for learning at a deep and permanent level - no matter what the particular arena of learning may be. The truly remarkable thing is that Dr Copley embodies what he teaches - he inspires by example and really walks his talk. He is not only content to dream visions of possibility but is committed to transforming them into action and reality. He is Patch Adams, he is John Keating from Dead Poets Society, he is any person who selflessly serves the human race and skillfully catalyzes holistic human potential, personal mastery, self reliance, community service, personal freedom and non violence.'
- Stefan Coetzee, Programmer

'Dr. Bruce Copley and his AAHA Learning associates create a wonderful safe space for a Learning experience which is holistic and appeals to multiple aspects of our human journeys. We were amazed at the amount of life-relevant themes which could be covered. We found it inspiring, healing, transformational and positively challenging and can highly recommend the Learningshop.'
- Louise van Rhyn, Director of Symphonia

'You achieved excellent ratings for both your sessions and were the only presenter to do this - due to this outstanding performance we would like to extend a special invitation for you to present at our conference next year.'
- Lennart Rohlin, President, MiL Institute, Sweden.

'You made such a huge impression at our annual conference attended by 1500 principals from all over South Africa that the decision to invite you to address our annual Teachers conference was unanimous... we want them like the principals to get excited about teaching using all your lateral thinking methods.'
- Gavin Keller, Academic Programme Director, South African Principals Association (SAPA)

'Dr Bruce Copley recently delivered a keynote address and a workshop at our annual International LearnX Asia Pacific 2007 Conference in Sydney's Darling Harbour. This is the largest and most prestigious training event in Australia incorporating more than 70 speakers and 350 delegates from all over the world. Bruce proved to be a superb communicator, an energetic speaker and an excellent consultant. He was a breath of fresh air and had a very positive impact on the conference overall. The majority of the attendees rated Dr Copley's contribution as the 'highlight' of the event.'
- Rob Clarke, Conference Organiser and Editor of 'Training Australia' Magazine

'This method is extremely conducive to learning and these concepts are never forgotten...'
- Steven Bagg (Operations Director, Sun City Resort)

'In all of the sessions I was privileged to have with Bruce I believe that these experiences have made me a better manager, friend, husband and father...'
- Christopher P. Johnson (Executive Assistant manager, Sun City Hotel)

'Your receiving a standing ovation at a business conference is very rare indeed...'
- Nils Welleus

'Elevates an organization onto a new plane of real learning...'
- John Counihan (Sasol)

'For the second successive year you were our top presenter...'
- Yvonne Olsson, (Management Institute of Lund(MiL), Sweden)

Research has revealed that 90% of information received is soon forgotten and that 75% of delegates 'disengage' from what is being presented at conferences, workshops and seminars. This is because little or nothing can be learnt by sitting in mute surrender before what is being presented. Fido will certainly attest to this! 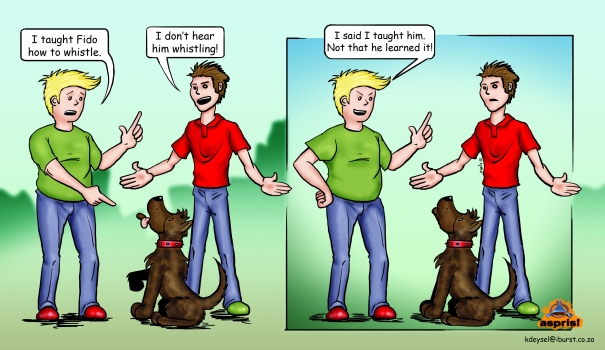 DOES THIS WHISTLE RING A BELL FOR YOU?

If traditional programmes and workshops are not becoming to you, then you should be coming to AAHA LEARNINGSHOPS - the definitive concept in EDUTAINMENT